MacDuffie Through the Years 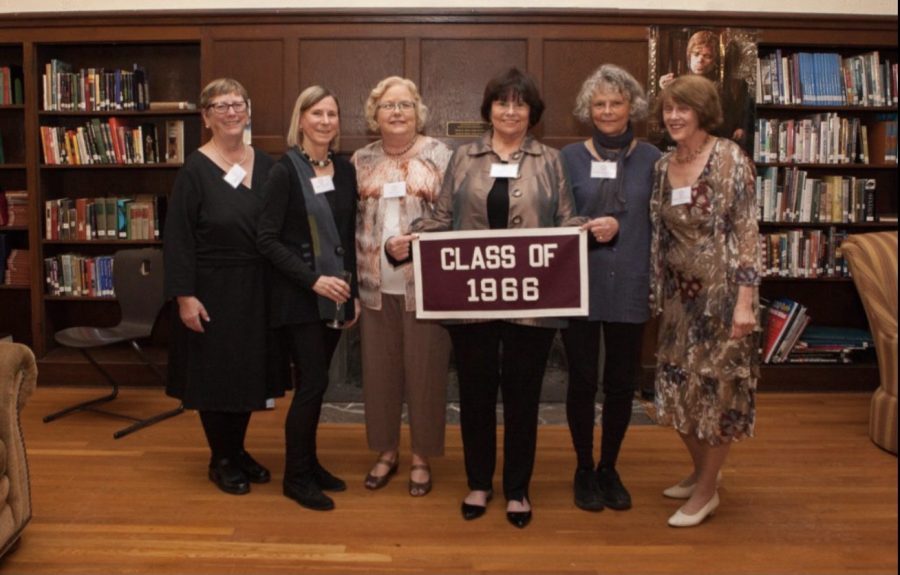 Members of the MacDuffie Class of 1966, including Dean of Boarding Dina Lyman, at a reunion in 2016. Photo provided by The MacDuffie School.

The MacDuffie School has experienced vast changes throughout the decades that it has been teaching students. In order to fully understand the development it has experienced, The Magnet asked six alumni from six different decades to answer the same set of questions. From asking these alumni for their first-hand experiences, we can better understand the experience of being a MacDuffie student during each specific time period. For starters, let’s meet the alumni interviewed.

Current Occupation: Dean of Boarding at the MacDuffie School

Question 1: What was your most memorable experience as a MacDuffie Student?

We were curious about what experience stood out as being very memorable to these alumni. This can also allow us to see what school traditions have carried on throughout all these years, as well as how they’ve changed over time.

Dina Lyman: “The most memorable experience for me would be Dr. Rutenberg’s Friday morning assembly talks. He talked a lot about our obligation quotient, our O.Q. he used to call it, and in short what he meant was… to those who much is given, much is expected in return.”

Bonnie Cox: “I was a six year senior, [and] that’s a lot of years. I can’t pick one experience, it was more of an overall experience. Being with students from all over the world, and getting a global perspective that it gave me in and out of the classroom. It influenced my worldview.”

Alexandra Russell: “The friendships and connections that I made there were super special. I think that the traditions that MacDuffie has are super special and ingrained in the community, like Candlelight were a big part of what helped me feel so connected and appreciated as part of the community.”

Ben Pike: “Well probably from being in one of the plays that I was in. When I was at MacDuffie, that’s when I was like… I love this. They did Guys and Dolls, this old school Broadway musical, and I played Nathan Detroit and it was pretty sick.”

Nam Vo: “My most memorable experiences were the theater rehearsals on Fridays until 10-12 pm.”

Daniela Tishchenko: “My favorite memory was probably staying up all night to paint the mural at senior sleepover, or framing gallery walls for the senior practicum.”

Question 2: What was your favorite part of attending the MacDuffie School on a daily basis?

We’ve asked about large and memorable events that are memorable to alumni, but we were also curious about daily events that stuck out in alumni’s minds. This question focused on the small aspects of the school that made these alumni’s experiences truly memorable.

Dina Lyman: “I just liked the freedom to be ourselves. I liked the friends I made. The teachers were amazing. I was really, really comfortable here, and I could really just be myself.”

Bonnie Cox: “I loved morning assembly… I loved getting together as a community every morning, I really appreciated that.”

Alexandra Russell: “I was a six year senior, and for the majority of the time it was an all-girls school. I definitely loved that. I felt like I was going to school with a safe group of sisters and we were all in it together, and the connections that we had with the teachers were really incredible. It was like nothing that I’ve had.”

Ben Pike: “You know what… I liked how every day there was a meeting in the theater to start off the day. It created this community aspect, and it was pretty friendly at the beginning of the day.”

Nam Vo: “My favorite part on a daily basis…[was]  going to classes, seeing familiar people, and struggling together.”

Daniela Tishchenko: “I loved the freedom most about daily life, we were given control over our schedules and if we had no class to attend, the campus was open anywhere to everyone.”

Question 3: What was the biggest change you noticed over your time as a MacDuffie student?

This is one of the most interesting things to observe over several decades of MacDuffie students, and the primary idea behind the article. This can show us what changes have been made over the years that the alumni were able to observe. It also helps us to understand the differences between student life over 50 years ago in comparison to student life today.

Dina Lyman: “We didn’t change much in those days. We used to jump up [for the seniors chant] and that whole thing starting with the 6th grade. And I will say, when we used to do that, and when Dr. Rutenber was in front of the assembly hall, we thought we were really, really rebellious. But as far as going to athletic events, I don’t think I ever went to an after school athletic event. We still had heart week and all of that. We sang the Magnolia Song all the time.”

Alexandra Russell: “[MacDuffie becoming a co-educational school] was definitely a tough time… going through that. I think I was a junior when it officially happened. It was a difficult time leading up to it, for the leadership of the school could make such a dramatic decision, and for us students… us proud women cheering on the MacDuffie tradition. It was hard at first, but we soon realized that MacDuffie is such a good place, so we might as well allow boys to have part of the magic along with us.”

Ben Pike: “I think the meetings got more fun. I remember when I was a senior, I was the Vice [President]. I remember we did a lot more games, so everyone had more fun at the beginning of the day. The way that athletics were organized, I believe, changed.”

Nam Vo: “I think that for their policy, MacDuffie got too focused on… non-essential things. Like the leadership practicum. It was probably for school ranking, but the thing was such a pain to do.”

Daniela Tishchenko: “The biggest change I saw was the decline in school spirit, as well as an increase in rules, especially about the dress code.”

Question 4: What access did students and teachers have to technology during your time as a MacDuffie student?

Technology has drastically changed over the past 60 years, and one of the perfect ways to observe this change is to ask each of the alumni about the access that they had to technology. Students today have become accustomed to technology, and this question can help us to understand how schools have advanced and changed, especially when it comes to the learning process.

Dina Lyman: “In the ‘60s… they didn’t even teach typing. The only audio-visuals that we had were film strips, the old fashion filmed strips with holes on the side. And they would be threaded into this projector that you would sort of… move by hand. There was no such thing as a copy machine. Teachers would run things off on the video graph machine. And if they had just done it, you could smell the video graph stuff, and that wasn’t supposed to be good for you, but it was fun to smell it.”

Bonnie Cox: “We didn’t have computers at all, no technology. There were no phones. We had a pay phone downstairs in Rutenber Hall. And then the dorms all had pay phones. There was a phone in Finn’s Bin with a vending machine. If you needed to reach home, you would use that phone.”

Alexandra Russell: “There was a computer lab in the basement of Rutenber Hall. There was a coding class in there [with] huge clunky computers.”

Ben Pike: “We didn’t have smartphones back in the stone age. Instead of an iPhone, the coolest thing were these flip phones. You were cool if you had this. It’s interesting because it was entirely different. We had a class on computers and they were teaching programs like powerpoint and excel and those are really skills that everyone should have.”

Nam Vo: “About technology… most people used laptops obviously. You need a laptop/tablet/phone to view assignments and such and to type in MLA format or Chicago with Times New Roman 12 pt.”

Daniela Tishchenko: “The technology was substantial I would say, the 3D printer was cool and there were always laptops available. The printers and Wi-Fi were always glitchy though.”