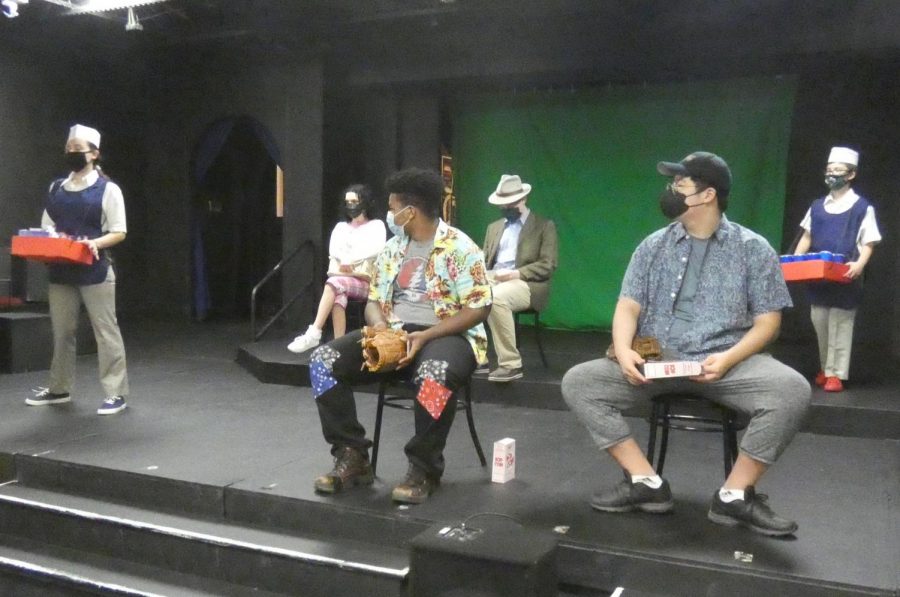 The cast of "Peanuts and Cracker Jack" rehearse in the Little Theater to prepare for their performance. Photo by Clara LaChance

This spring, the MacDuffie theatre department performed two spring one-acts, “Abraham Lincoln Dies at Versailles” and “Peanuts and Cracker Jack.” Both of these one-acts were performed outside, making it the first live theatre production this year at MacDuffie.

Ted Lyman was the director of the plays. Arts Department Head Becky Beth Benedict was the producer, and Assistant Dean of Boarding Lucy Tew was the assistant producer.

Both are about two very different relationships. “One is a young budding relationship, and one is a relationship that is trying to deal with some problems,” said Benedict.

In order to have a live production, many safety precautions were put in place. The cast and crew remained masked as well as socially distanced during rehearsals.

In terms of the performance, the audience sat in the grass in front of the school. Circles were spray painted in order to ensure that the audience was socially distanced. Tickets were sold online, in the form of “touchless ticketing,” as Benedict called it, and masks were required as well.

Some of the challenges that the MacDuffie theatre department has faced began the first week of rehearsals, as they began virtually. However, Benedict and the cast turned it into something positive.

“That allowed them to be able to do a lot of, what we call, tablework, which means we’re sitting at a table. We’re going over this and we’re going over the meaning of words,” said Benedict.

Eighth grader Brooklyn Moore, who played a girl in “Abraham Lincoln Dies at Versailles” as well as a character named Gloria in “Peanuts and Cracker Jack,” stated that she especially had trouble with character lines “because it’s two separate characters… it’s very challenging not confusing the lines,” she said.

Another challenge that occurred was in the weather. There was no rain date set, which could have posed a problem. “The other challenges will continue with us,” Benedict stated, and later said, “We’re solving things differently.”

Being the first live play during the pandemic at MacDuffie, the rehearsal process is very different for the actors. Freshman Mitchell Martin, who plays a spectator in “Peanuts and Cracker Jack,” said, “It’s very different because we have to wear masks, for one, and it’s going to be very hard to project our voices.”

Moore added to this and stated things had to be modified as social distancing was required. Her character, for instance, was meant to touch another character, but this had to be changed.

Moore continued and said, “This past year has just been so odd and confusing, so I’m happy to be on stage again,” while Martin said he is excited “seeing it all come together.”

“We’ve had such a great time this year with all of the things we’ve tried, with the movie and video making… but one thing that there’s just no way to replicate is that invisible exchange between performers and audience, and it’s this loop of energy that goes between the two of them… This is why live performance will not go away,” said Benedict.