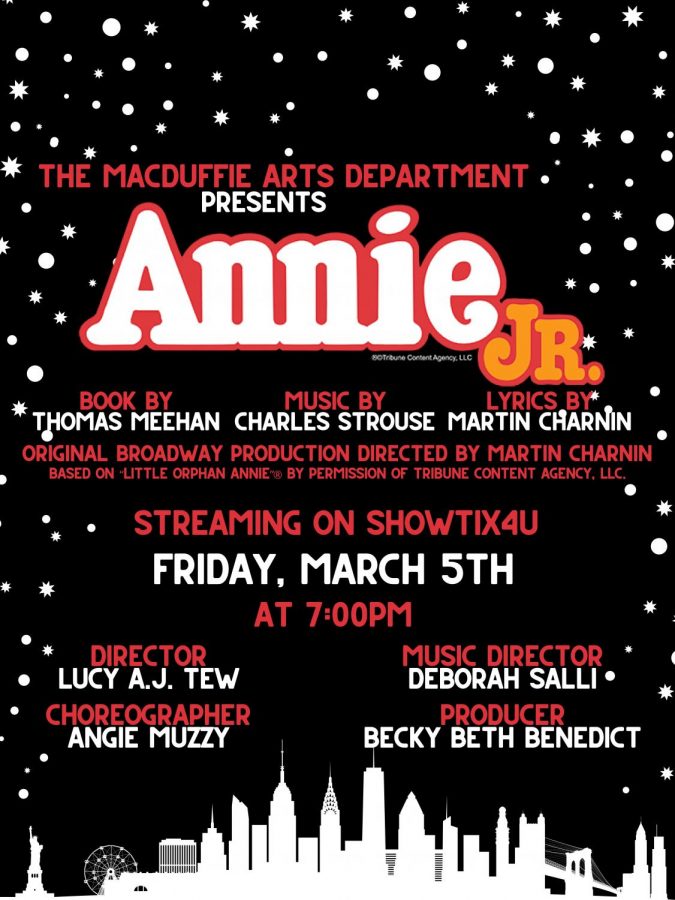 Annie Jr, MacDuffie’s winter musical for this year, is being recorded and released as a film for the MacDuffie community to enjoy as a rental. A lot of activities and events all around the world have been affected by COVID-19, and The MacDuffie School is not immune to that, which is why Annie Jr is being recorded instead of being presented as a live play.

Theater teacher Lucy Tew is the director for Annie Jr. According to Tew, all the filming is done on Zoom, the video conferencing platform that is also used for online learning at MacDuffie. Since each student has a different home environment, each cast member brought a green screen home so that they could hang it up on a wall, stand in front of it, record, and then the video editors can replace the green screen with any image. This simulates changing the set in an in-person show.

Video editing is one of the many roles that students have taken for this production. WeVideo is a popular online video editor that is being used in this production and has been used for other movies as well, such as Macbeth the Movie. Having an online video editor like WeVideo instead of something such as iMovie, which is only compatible on Macs and has to be downloaded, means that everyone can collaborate on the project as long as they have access to the internet.

“It’s been very fun meeting as a group to explore the animations and options available to us on WeVideo that weren’t necessarily as useful for Macbeth. Because this is not a movie like Macbeth was, we have a lot of very fun things we can try with this production, such as animated entrances of characters and unique backgrounds,” said Tew.

There are 6 editors who work alongside producer Becky Beth Benedict and director Lucy Tew. There is also a stage manager, senior Victoria Vecchione, whose responsibilities include arranging breakout rooms during zoom meetings, among other things.

“Mr. Kaminski has graciously and generously volunteered to do our sound editing on ProTools, ” said Tew.

When Annie Jr. gets released soon, anyone can rent the film on the same website that the winter dance and music concert were unveiled, as well as MacBeth The Movie. It will be the culmination of work done by many students and faculty over the span of several weeks.

“[We have] seven additional actors (including MacDuffie adults and alumni!) doing some special cameo work – so keep an eye out for them in the final production, ” said Tew.  Mark this Friday’s d3/4/21ate on your calendar as that is when Annie Jr. will be completed and presented to the school.