The Fall Play is a Movie! 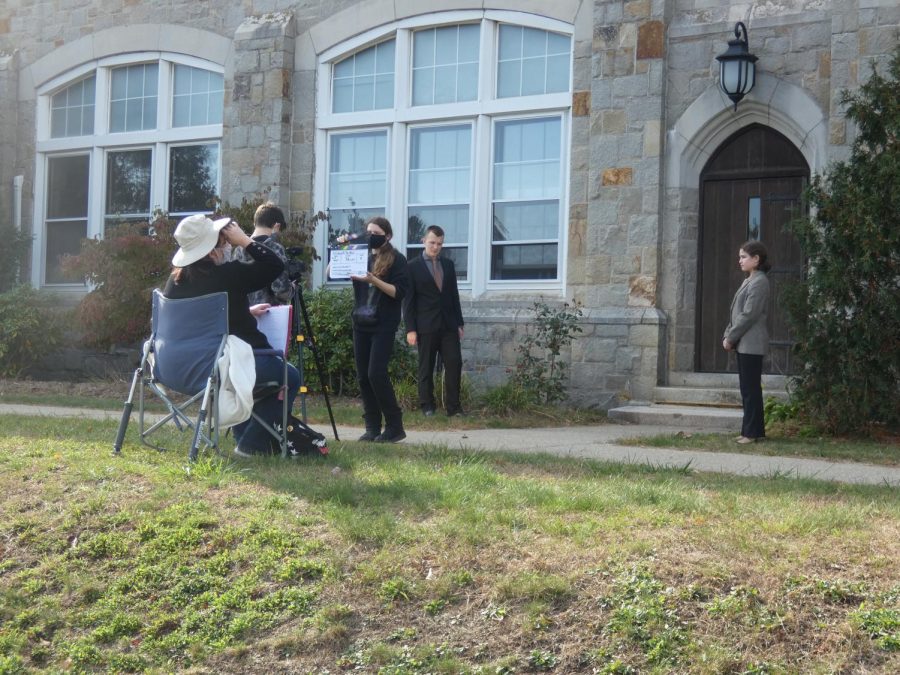 The cast in the process of filming, photographed by Clara LaChance '23


This year’s fall play is going to be different compared to other years. Why? It is now a movie! Due to the pandemic, people participating in the play must wear masks and apply social distancing. In order to follow all of the safety protocols set during the pandemic, the director of Macbeth, Ms. Becky Beth Benedict (Ms. B3), has decided to create a movie rather than a play. This is definitely going to be a new and exciting experience for the Macbeth cast and crew.

Ms. B3 has several reasons for her choice of Macbeth. Of course, with the pandemic and the restrictions put in place, a play with a large audience would not be a possibility. Therefore, Ms. B3 took it upon herself to produce a movie.

She also said that for the past couple of productions, MacDuffie has performed comedies and it was time to bring the drama back. She explained, “It seems wrong to let someone graduate and in their high school career to have no exposure to Shakespeare as theatre versus just as literature in class.”

Ms. B3 said, “There’s also something in this year where we’ve lost so much, our lives have changed so much. There’s something about just going to the raw dark side of  Macbeth and just living there for a while.”

One of the actors and crew members from Macbeth, junior Ngoc (Helen) Hoang, who  plays the role of Angus, a politician from Scotland said, “Macbeth is the first film that I had joined and also the first time I joined the theatre at MacDuffie.”

Helen explained that she became a part of theatre because she enjoys acting, and was interested in the movie, since it would be different from past years. Helen also joined behind the scenes of Macbeth as a member behind the scenes, because she said Ms. B3 needed a crew.

When asked what was different about a movie from a play, Ms. B3 stated, “Everything. Absolutely everything.”

Helen went further and said, “Filming has many differences, especially the crews. We have camera operators and editors.”

Sophomore Nathan Stevenson, who plays Banquo, Macbeth’s loyal friend, also mentioned that it was very different. “It’s kind of weird, but I kind of like it,” he stated. He said that it was very different from a play because the actors could memorize their lines for a certain scene and then forget them once filming was over, as opposed to memorizing an entire play to be performed several times.

Helen talked about how Ms. B3 has a great outline and idea of what needs to be done in making the film great.

Eighth Grader Oliver Barcome-Laflamme, who plays the role of Macbeth, said, “For the most part, we are keeping up on time,” and continued to say that Ms. B3 had been doing an excellent job directing the movie.

Utilizing the campus rather than performing in the Little Theatre has certainly been a change for both the actors and director as well. “We miss the little theatre,” Ms. Becky Beth Benedict says. “It’s our home.” However, she says that the cast and crew of Macbeth are having a great time using the campus and making new discoveries about it. “We’re not building a set. We’re just using what the campus already has to offer,” she says.

The actors had fun both onset and offset. Helen’s favorite thing to do during rehearsals is help with setting up the set of Macbeth. Nathan however, enjoys going backstage to the costume room, where he can have fun with the crew working there, and Oliver enjoys hanging out with his friends and acting in general.

“Which tragedy happens after this?” said Helen. Theatre has most certainly not been stopped during this pandemic.