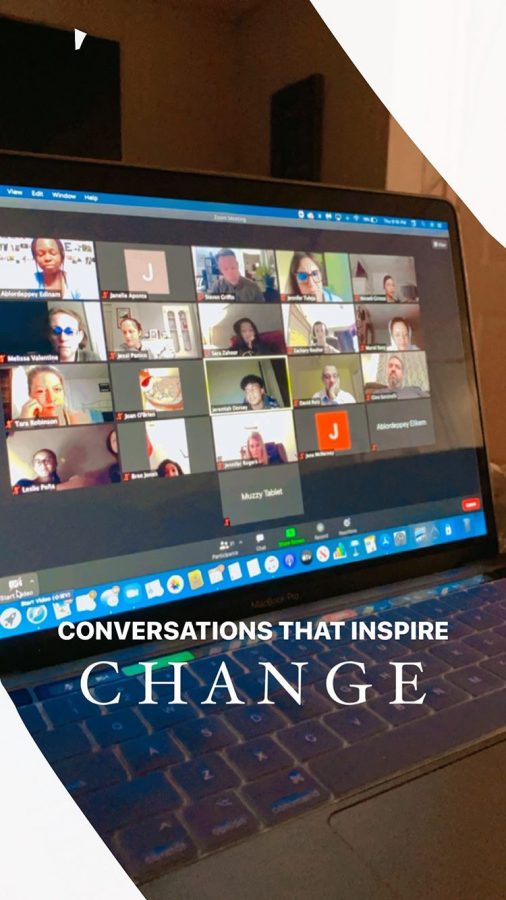 In the current political climate, social inequality, as it pertains to race, is something we must address. As a diverse school, we must take an active role in the betterment of our community, and such actions start by asking a single difficult question, “How would students of color describe their experience at MacDuffie?”

By asking this question, we can begin to engage in an uncomfortable, though admittedly necessary, dialogue, one that will help foster growth in our community. Here is a look at the experiences of various students of color, in their own words.

Not a day goes by where I don’t feel like a target. Don’t get me wrong, I’m not a saint or anything, but there are days where I feel like a scapegoat. The expectations for me and my teammates are just set so high, to the point where the smallest infraction results in disciplinary action. Walking down the hallway, I feel like most people have a preconceived notion of who I am based on my appearance and hobbies. I don’t feel like there are many people I can confide in when it comes to this, there’s just no reason for most people to understand how I feel. Not everyone has to walk down the hallway and get yelled at for something they didn’t do or get pulled aside because of a rumor about you that isn’t true. It’s just tiring.

I’m not sure why, but there’s this general consensus that, if you’re a person of color, you have to like rap music. It’s a bit ridiculous, considering that anyone can like any genre of music. But people of color can only like rap, just rap, nothing else. We’re considered weird if we listen to anything else, even music genres that originated in our communities, like R&B or Jazz or Blues.

During the winter of last year, I was sitting in the student center with a few friends. It was after school, so we were just chatting and hanging out while we waited for basketball practice to start. There were several other groups of kids hanging around too, one of which was playing music, rap music to be precise. You probably know that after school, students are technically allowed to play music on the Student Center speakers, just as long as it’s not too loud or explicit. The people who were playing music made sure to play the censored version of their favorite songs, and it wasn’t loud either, so no one really minded. That is until a faculty member came in and beelined for me and my friends. We weren’t doing anything but talking, but the faculty member still yelled at us to turn the music off. It was a bit jarring, getting yelled at for something as stupid as rap music that we weren’t even playing!

During my freshman year at MacDuffie, I tended to gravitate towards people who looked like me: brown skin, curly hair, brown eyes. Maybe it was because of the new environment, or the wide array of diverse cultures, but coming into MacDuffie as a new student was a bit daunting. It was my understanding that people of similar backgrounds to my own were more likely to identify with my experiences, which was true. We formed a tight knit bound and mainly talked to each other and no one else.

I’m not sure why, but people seemed intimidated by a large group of colored girls. A certain group of students continually started drama with us, for no real discernible reason. They labeled us as dumb, and took any opportunity they could to undermine our intelligence and start problems. Of course it is high school, so what do every teen group of girls do when they feel threatened; they start rumors and call us names.

My friends and I had no intention of getting into petty fights because they were meaningless and pointless. So they called us “GHETTO.” At first we didn’t care but as time went on that is how others saw us. They didn’t know us for our athletic or academic achievements, but just by the color of our skin and where we lived. This shaped how I interacted with other people because I didn’t want to open myself up because when I did they betrayed me by starting rumors. In a way, they made us rude. They made us have to put up walls and in return we were labeled as ghetto.

I walked into my first class and before I even had the chance to sit down the teacher gave me an infraction for breaking dress code. The teacher failed to acknowledge the caucasian female to my right wearing the shortest dress alive or the other caucasian male who was wearing striped adidas pants. They just targeted me for breaking the dress code.

Did I deserve to get the infraction, yes. But I did not deserve to be singled out by a teacher from my fellow caucasian peers to be given a punishment that we all deserved. This was not the first time I have been singled out for a dress code violation while other students walk right past getting no punishment or just a slap in the wrist. It has gotten to the point where I have even dreaded coming to school just because I knew I would be targeted for something everyone was doing.

This may not seem like a big deal but for me it was. I shouldn’t feel like I am being targeted by a teacher. I shouldn’t have to dread coming to school. And I especially shouldn’t have to write this story because of it. I have been targeted by my skin color before but in a school that praises their diversity, they don’t seem to make their students of color feel welcomed or appreciated. This just contributes to people of color getting unfair or harsher punishments than their caucasian counterparts, for the same offense, solely based on the color of their skin.

I was just hanging around one day, chilling during my free period, when one of my classmates stopped me. He looked a little embarrassed, standing in the middle of the hallway, awkwardly patting my shoulder. He looked at me and said “I’ve always had a question, can I ask you?”, and of course, me being me, I said yes. He asked “Is it Pakistani or Paakistani?”

It just filled my heart with joy to see someone truly interested in my culture. He asked a genuine question for clarity, with pure curiosity and passion, and wasn’t insensitive or rude. In doing so, he showed me that he really cared and embraced diversity.

Being a person of color isn’t always bad. It is sometimes rewarding because you have people, like the guy who asked serious questions about Pakistan, who are actually interested and want to learn about different cultures. I am always excited to answer any and all questions people have about Pakistan because I am proud of who I am and want people to know that. Being in a school like MacDuffie that embraces diversity is so great. We have people from all walks of life and we get to learn new things about different cultures and countries.

Diversity was a contributing factor as to why I chose MacDuffie. As for my experience as a student of color, it’s different every year. I find it to be dependent on the students who are attending. Ninth and tenth grade I was treated normally. As for last year, we had some European students who said things without understanding the consequences of what they said. I’d say this year is going well as in those regards. In the curriculum, I don’t feel as represented as I would like to be ideally; I think the history of my people should be more in-depth.

I believe that MacDuffie has a very low tolerance for people who say or do racist things, which makes me feel safe. In general, I’d describe MacDuffie’s environment for students of color as pretty welcoming. Sage Dining contributes to this factor. They try their best to make their cuisine culturally diverse. It makes international students like me feel as though they care about what I want to eat.

We hope that by reading these stories, you’ll gain a deeper understanding of the experiences of MacDuffie’s students of color. It should be understood that the worldview of any person of color is undoubtedly shaped by the social encounters they undergo, mostly as a result of their skin color and culture. This article exists as an educational tool, to better incite important dialogue surrounding the topic of race within our community.

If, by chance, you recognize yourself in any of these stories, take a look inward. Understand that an encounter you may have had with a fellow classmate left an impact, whether positive or negative, that has yet to be seen. We must all take responsibility for our words and actions, especially when considering them in the scope of communal experiences. To be able to reach inside someone’s heart and mind, appealing to the greater soul that exists within, isn’t possible through the normal methods of discipline. It takes courage to stand up and implore those around you to educate themselves on the topic of race and racial prejudice. The notion that people don’t see color is false. People see color. It’s the choice to not not judge or define a person by the color of the skin that is the defining characteristic of human empathy. After all, if you don’t see color you are blind to the injustices of the world.