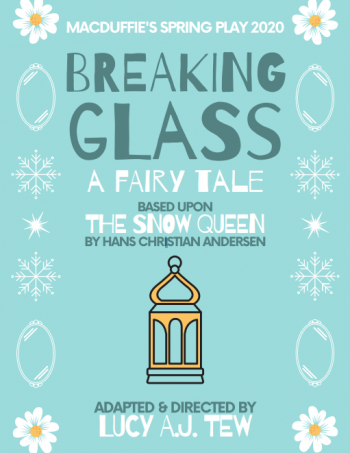 On Friday, May 15th, MacDuffie theater released the audio version of the Spring play, Breaking Glass: A Fairy Tale, directed and adapted by theater teacher Lucy Tew. It was performed on Podbean, a podcasting platform.

“I just really hope this play is something we can look back on as a community and say we made something that was meaningful to hopefully the listeners and the people who made it when we couldn’t be together,” Tew said.

Initially, Tew was planning a way to make up for missed rehearsals, but as that number started to grow, she realized that “there was no way to pull together a show like we normally do.” Although she had the option to cancel the show or to delay it to next spring, she chose the audio version.

“I really wanted to work with this cast in this combination. You know there are seniors and people that do not ordinarily show up,” she said.

Senior Rose Nguyen has performed many roles for the MacDuffie theatre. She was “disappointed” when she thought her last performance was going to be canceled.

“When I learned that we changed it to a podcast, I was happy to keep some kind of activities and traditions even in the pandemic,” Nguyen said.

Similar to Rose’s response to the change, Tew said the cast was “extremely positive and excited.” She had contacted the cast asking if they were interested in doing the play as an audiobook, and within an hour, she had all 16 responses with 15 members indicating their interest.

Needless to say, not all rehearsals went smoothly. “One of the hardest rehearsals, we had eight people in one scene so I had all eight of them on my screen. We read the whole thing with delays, camera cuts, my cuts when one of the cast members was in a car and would drive through places without service leaving the meeting and coming back,” Tew said. She believes the generosity and compassion of the students for each other made the rehearsals work.

The play received good feedback and support from students, faculty, staff, and even the comments section of the podcast page.

“I will reminisce about the play. It was really meaningful. Although we are in difficult times we still made the best out of it and had fun,” Nguyen said.

Like the production of the play, the script is unique as well. Tew chose to do a fairytale-inspired play because “almost every culture has a fairytale that you would recognize from your own.” She was especially drawn to The Snow Queen because as a young girl she loved that the protagonist was “a normal little girl that goes on a magical adventure.” Even though the storyline is adapted from The Snow Queen and a Norwegian tale, East of the Sun and West of the Moon, the characters of four sister whims were Tew’s own creation. The script not only provided a distinctive experience for the audience but also allowed Tew to alter the script to make it more adaptable to the radio.

The play is still available on Podbean for those who missed it or wanted to listen again! https://www.podbean.com/site/Search/index?v=Breaking+Glass%3A+A+Fairy+Tale