In Defense of Heart Week: Opinion 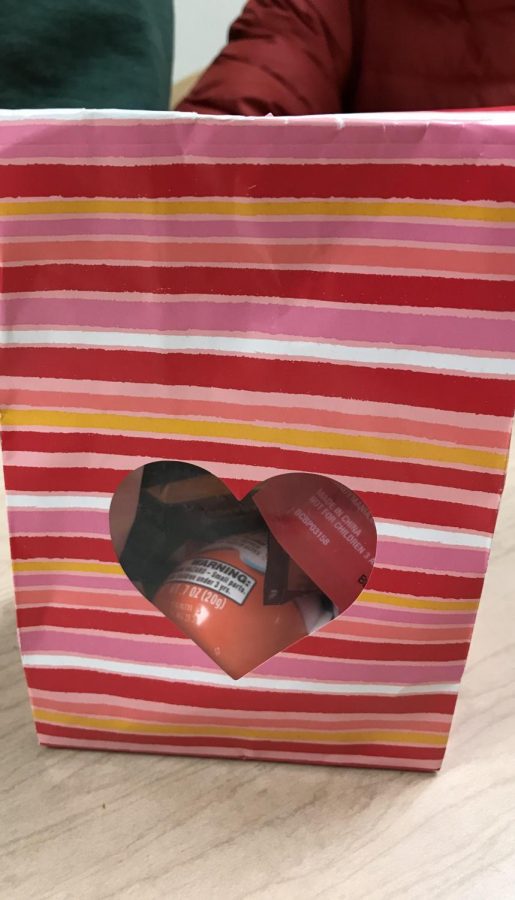 A Heart Week gift left for a student last week.

In the midst of a lively global news cycle, the last thing on everyone’s minds is Heart Week, a Valentine’s Day-themed Secret Santa that has been an annual tradition at MacDuffie for nearly a century. However, I signed up to participate in Heart Week for all five days, and here’s why I encourage everyone to do the same in the future.

Participation had been mandatory for all MacDuffie students since Heart Week began, but diminishing enthusiasm over the years prompted the administration to make the tradition an optional activity. This change has ensured that those interested in participating will be matched with each other, which has minimized the horror stories of receiving a half-eaten apple or nothing at all. Yet this is not quite a happy medium for me, an unabashed supporter of the tradition.

When I covered the changes made to Heart Week in an article about a year ago, I spoke to MacDuffie alumna and Boarding Department Head Dina Lyman about her experience with Heart Week as both a student and faculty member. While I agreed with Lyman on the fact that Heart Week is a creative way to brighten things up during the “gloomy winter months,” in her words, I had enjoyed participating in Heart Week even before I spoke to Lyman.

For me, Heart Week has always been an opportunity to improve someone’s day, whether I know them personally or not. Although I have had more fun when my Heart Person was a friend or a teacher I’ve had, my experience with Heart Week at MacDuffie has been a positive one. This is because it puts me in a good mood to know that I’m likely making somebody happier by giving them a gift.

Since I believe many of my peers have opted out of Heart Week due to mere disinterest rather than a strong conviction against the tradition, I would like to share some of my personal experiences with Heart Week throughout my four years at MacDuffie. If I can convince at least one of these individuals to rethink their decision, I will feel that my anecdotes have been put to good use.

At one point in the week, the student who had been giving me gifts was unable to purchase a gift for the given day, but he reassured me in a remorseful note that he would provide an extra gift on the next day. This gesture meant more to me than the gifts themselves because it showed that this student wanted to ensure that I, a freshman whom he did not know, would not be disappointed. Furthermore, my own Heart Person expressed his gratitude for my gifts because he hadn’t received anything the year prior, which made me realize that I could make somebody’s day by simply giving them a candy bar.

During my sophomore year, I was on the receiving end of this feeling when I was given incredibly thoughtful gifts from one of my favorite teachers. Each day I came to school, I looked forward to seeing a book of writing prompts or a card game left for me. Having been the Heart Person of someone who put immense effort into purchasing their gifts and presenting them in a creative way, I decided to pay it forward in the future by making the week of Valentine’s Day special for my Heart People. The moral of my story may sound materialistic, but I think everyone should take this inexpensive opportunity to bring happiness to someone who is enduring the dreary winter.

Even though everyone has had a different experience with Heart Week at MacDuffie and has consequently developed their own perception of the tradition, I strongly encourage any individuals unsure of whether or not they will participate in Heart Week to consider my anecdotes and think about how they are capable of being the source of happiness for a fellow student. Heart Week isn’t necessarily an effective way to make new friends at MacDuffie and should not be a mandatory activity for students, but it is crucial that those who see the merits of Heart Week keep the long-standing tradition intact.

Disagree with this opinion? Check out this fiery article opposing Heart Week, written by Gabe Shumway.