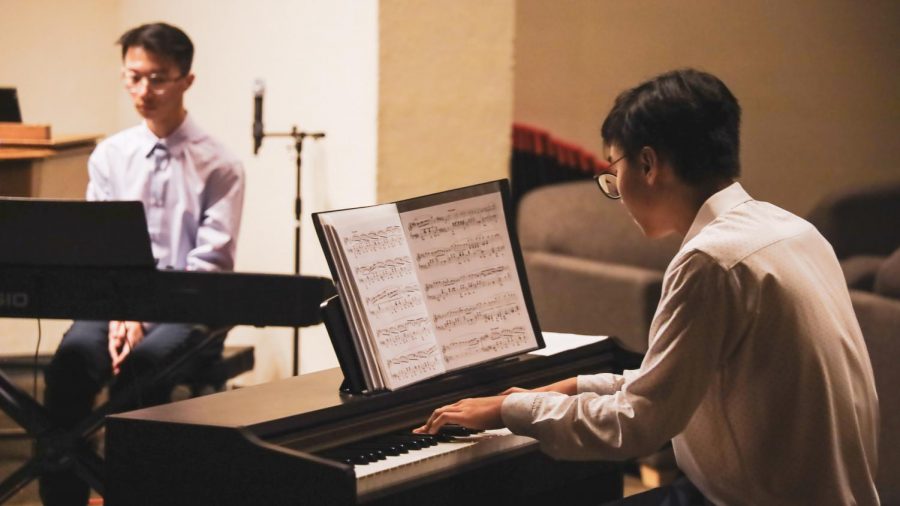 Senior Ryan Đoàn and sophomore Phillip Duan are playing a musical piece at the piano concert fundraiser. Fundraiser was held to purchase a new piano for the MacDuffie School.

The students had been frustrated by the conditions of the school’s piano, so they decided to organize this event to help them purchase a new one.

All of the three students had their own musical backgrounds. Duan said, “I started at a very young age, but I stopped for a few years until I came to MacDuffie.” Đoàn also started playing piano when he was 6 years old, and he ventured deeper into classical music at the age of 10.  Bordenca, on the other hand, said, “I’ve always had an interest; I started getting more into it a couple of years ago.”

The boys gave a demonstrative performance in the school’s assembly before their show and encouraged school members to come and support them at the concert. The entry to the event was free, although the performers expected some donations from the audience.

Đoàn said he didn’t know how many students he originally expected to be in the audience because it was “the first time [he had] held something like this.” He added, “I hope that we will have a large and supportive audience.”

The original idea of purchasing a new piano was suggested because of the poor state of the school’s existing pianos. “The existing pianos on campus are all in a bad condition,” Duan said, “and the keys on one of the electric piano keyboards cut my finger last year when I was practicing.” After this happened, Duan came up with the idea of purchasing a new piano for a school.

During the performance, sophomore Akana Nakamura was pleased by the pianists’ music. “I  really liked the piano concert. It was a really good time to relax or to have a break from school-related stuff,” she said. The concert included some upbeat, modern pieces mixed in with classical pieces. “They put on a really good show,” senior Atom Chamnongnit said. “I could listen to them play for longer.”

In the end, performers earned $768 during the fundraiser. “It exceeded my expectations,” Duan said. He also said that they are still thinking about whether to refurbish the school piano or purchase a new one.

However, the piano that the boys are planning to purchase most likely won’t be an electric one. “We never really considered electric ones since our school already has 2 of them, and we prefer the acoustic of an actual hammer striking the string when we play a note,”Đoàn said.

“When I hear a great piece of music, I really want to be able to perform it,” Đoàn said regarding the origins of his interest in the piano. Duan added that playing piano is soothing and calming for him.