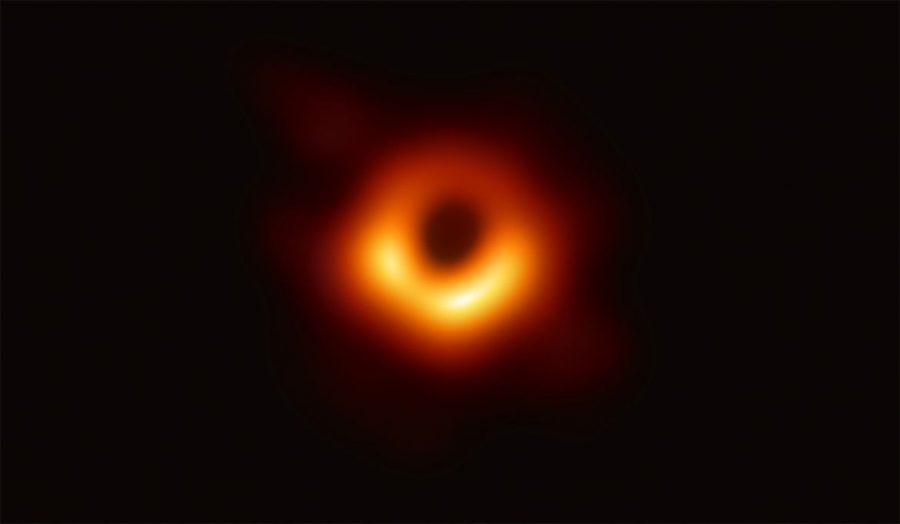 Photo of a blackhole. Photo by EHT Collaboration.

No one has been able to capture an image of a black hole until just recently.

The existence of gravitationally completely collapsed objects or GCCO was predicted in 1915 when Einstein first published his equations of relativity. It wasn’t until decades later that journalists became tired of calling them GGCO and dubbed them “black holes” due to the fact that nothing—not even light—can escape them. In the past, astronomers have tried but failed to capture an image of these elusive objects. Amazingly, it was announced on April 10th of this year that scientists from the Event Horizon Telescope Collaboration had taken a picture of the black hole located in the center of the M87 galaxy!

So what are we looking at exactly? When dust particles fall near a blackhole they are heated due to the gravitational effects. The glowing ring we see in the image is made up of these very hot dust particles and at its center is the black hole.

New protein-folding AI predicts the structure of a protein faster than ever before.

A protein is simply a chain of amino acids that are all folded and jumbled up together due to intermolecular forces. It is this three-dimensional structure that ultimately determines a protein’s function. Therefore, being able to predict how a protein will end up looking like based on its amino acid sequence is crucial to medicine and drug design. In December of last year, Google’s artificial intelligence called DeepMind learned how to effectively fold proteins. This past July, however, a biologist at Harvard Medical School announced that he had created an algorithm that utilizes a completely different method, allowing for much faster analysis of amino acid chains.

Scientists from the University of Copenhagen have found the key to earth’s biodiversity.

Earth’s biodiversity is astonishing. Scientists have identified and studied over 1.3 million species but the truth is that there are many more. The most accurate and recent census, led by the University of Hawaii, estimated that there are 7.4 million undiscovered species on the planet. Using some arithmetic, that is a whopping 8.7 million species living on Planet Earth.

What are the factors that control global patterns in biodiversity? This question has puzzled evolutionary biologists since Charles Darwin himself. A paper published by the University of Copenhagen sheds some light on this issue. Scientists have found that mountains are hotspots for diverse species of on-land animals. Despite accounting for only a quarter of Earth’s land area, they host over 85% of the world’s birds, mammals, and amphibians.