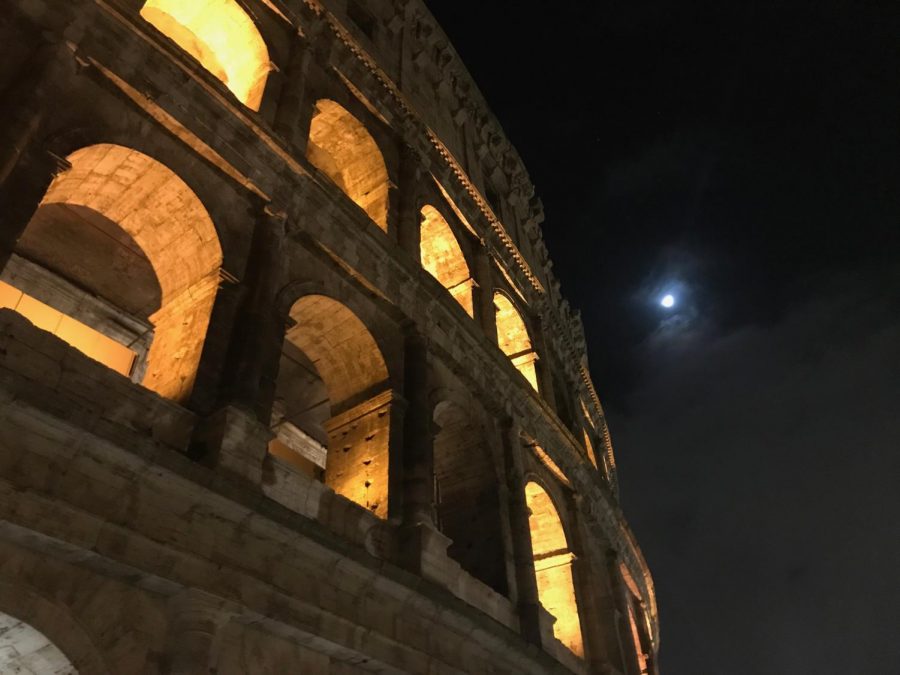 The Colosseum by night

We flew through the night yesterday, and this morning (I think… time changes are confusing) we met our tour guide for the trip—her name is Elena—and arrived at the Hotel Lux. We wasted no time and spent the afternoon mini sightseeing around the city. There was one place where you can look through a keyhole in a door and see St. Peter’s Basilica out in the distance. The scene looked purposefully artistic. As a matter of fact, almost all of Italy looks artistic like this. As the sun set, we walked to see the Circus Maximus (basically a big racing stadium) and then to dinner. Our first dinner in Rome was at “La Gallina Bianca.” There were three courses: Pasta, beef and potatoes, and tiramisu for dessert. It was the most delicious food I’ve ever eaten.  The pasta was homemade, the potatoes were expertly fried with fresh rosemary, and everything was cooked to perfection. Italy is famous for its food for a reason 😀

P.S. Speaking of food, Elena mentioned today that Rome is like a lasagna— there are so many layers of history here that it’s hard to keep track of all the eras. Yet, it works together so well and creates this iconic “Roman” city look that you really can’t get anywhere else. Did you know that when the city government tried to expand the metro system, they found a UNIVERSITY that was buried in the ground? That’s why the metro is limited; they can’t build it without running into historic buildings.

We got up at 6:30, had breakfast and went by metro to the “Amphiteatrum Flavianum,” or Flavian Amphitheater (or in simplified terms, the Colosseum). No joke, the metro stop is called “Colloseo” and as soon as you come above ground, BOOM— it’s right there in your face. I’ve seen so many pictures that absolutely do not do it justice— it is jaw-dropping, for lack of a better description. We had a separate tour guide for the Flavian Amphitheater, Irene, who was very informative. After we’d finished the tour we had lunch; I had some lasagna, and we also got our first taste of real Italian gelato! You pay first, then choose multiple flavors, and stick a wafer in the top; I don’t think I’ll ever eat ice cream the same way again. We also visited the Roman Forum. There were so many different buildings— temples to Vesta, Caesar, and Castor and Pollux, the Basilica Aemelia, the Curia (the senate house), and more all in one place! It was sensory overload. At the end of the day, we all got more gelato! Yay!

We visited the Vatican City! It was beautiful- the architecture and artwork were breathtaking. The highlights, of course, were St. Peter’s Basilica, the Sistine Chapel, and St. Peter’s Square. It’s fascinating to see what people created back in the 16th century- with no modern technology. Really spectacular. After that, we walked to the Spanish Steps (crowded with people), the Trevi Fountain, and the Pantheon! From the inside, the dome looks like a beehive- orderly hexagonal pieces that make up a great complete whole. From the outside, well, it looks like the Pantheon XD. It was surreal (as a Latin student) to be there, and to read the inscription, “M AGRIPPA LF COS TERTIVM FECIT.”

Today was the last day in Rome. It was off to Sorrento, but on the way, we stopped at the Naples Archeological Museum, and then Pompeii. The museum was fascinating, and I wish we could have spent more time there. We saw a lot of really beautiful mosaics and sculptures and even a mummified crocodile in the Egypt section! Pompeii was equally fascinating with well-preserved murals and this one really cool fountain. We also saw a few castings of the people and animals that died. Did you know that archaeologists found money in someone’s hand? They might have been on the way to the market when the volcano erupted. It’s amazing that a natural disaster could preserve something like this for centuries. Finally, after a three-hour bus ride, we made it to Sorrento. It is a very unique place; lemon and orange groves are packed in between pastel buildings and narrow streets, and it all overlooks the Mediterranean Sea.

Today was our break from walking after traipsing around Rome for so long. We went on a sightseeing bus ride down a terrifyingly skinny road on the Amalfi coast, taking a stop to look at the water, the colorful pastel houses with flat roofs, the terraces, and the sky. It was all so picturesque. We all gave a rousing round of applause to our driver after that trip because we’d sometimes slow to a crawl or complete stop to get by cars, motorcycles, or even other tour buses going the other way. After the Amalfi coast drive, we spent some time in Paestum, with another guided tour. We were able to actually walk inside some of the oldest Greek (not Roman) temples around and really appreciate the skill and labor that went into them. Following a relaxing lunch in the sun at a quaint cafe, we drove to the catacombs— an underground burial ground maze. Most of these were empty, due to grave robbers. We could only stay down there an hour because of the chemicals that stayed underground, and honestly, that was good enough for me. The place was massive yet claustrophobic, something that would not bode well for anyone who got lost. At the end of the day, we made our way back to Sorrento for some free time in a big pedestrian plaza before it was time to eat dinner, head back to the hotel, and fall asleep in an instant.

Today was the last day in Italy 🙁 We took a ferry to the island of Capri and went on a fairly pleasant (but steep) hike to the place where emperor Tiberius’ lived called the Villa Jovis. The view from the top overlooked a thousand-foot cliff, where seagulls were circling down by the rocks. I ate a tuna sandwich at an outlook; the weather was beautiful. After returning down to the beach (the hike down was exponentially easier), we enjoyed one last serving of gelato and a few of us went and swam in the Mediterranean Sea. It was extremely cold, but clear and pleasant nonetheless. On the way back, the mood was bittersweet- just like tiramisu. Italy really is a historical and natural paradise (particularly for tourists). This has been a fantastic experience, a once in a lifetime expedition. Our group was close over these ten days; I’ll miss the time we had together (and I’m going to miss Nam too). Vale, Italia.