In Defense of Song Contest 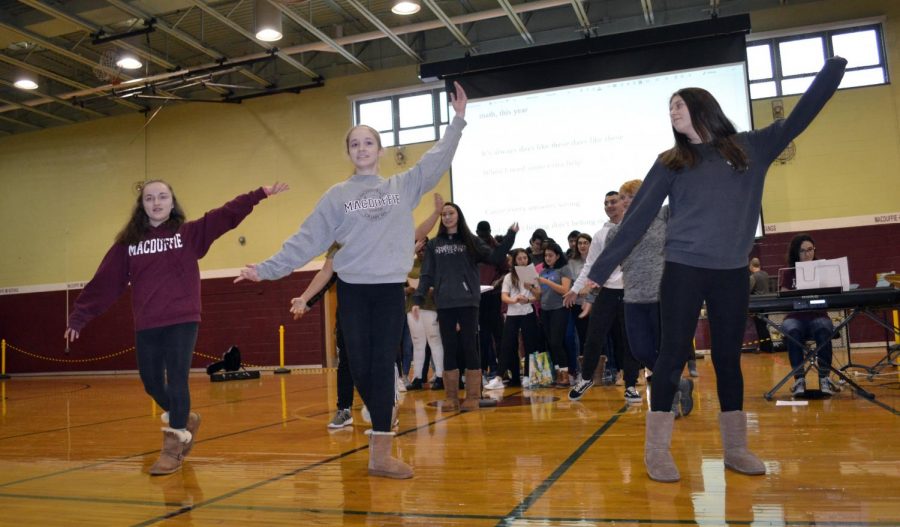 Photo courtesy of the Yearbook " />

In a parody of Vanessa Carlton's song "A Thousand Miles", last year's freshmen Savannah Richard, Madeleine LaChance, and Hannah Sudsbury participate in a group choreography. Photo courtesy of the Yearbook

Song Contest. I don’t know about you, but in my past class meetings, those two words have been a cue for scattered sighs and the occasional eye-roll. I’m going to be completely honest with you; I used to be one of them. Song Contest was uninteresting and cringy; my class wouldn’t prepare enough, and in the end we would just barely scrape through ultimate humiliation with the aid of a handful of charismatic singers. My mindset was always, “I have enough to do already; why do I have to do this too?” and I simply could not see the value in it.

Therefore, when I offered to write a column piece on Song Contest, I thought for sure I knew what I would say (i.e. various points from the above paragraph). However, when I looked into the subject some more, what I found surprised me. I spoke briefly with both Mrs. Lyman and Mr. Griffin about the origin of Song Contest along with what they enjoyed about it. Neither one knew exactly when it started, but Mrs. Lyman informed me that it has been around for a long time at MacDuffie; it was around when she attended the school in the 1960s and had been around long before that.

I’d always assumed that Song Contest was a fairly recent tradition, maybe going back fifteen years or so. Instead, it has lasted through multiple decades and seen the rise and careers of iconic artists. These include and are not limited to: the Beatles, the Rolling Stones, the Supremes, Led Zeppelin, David Bowie, the Bee Gees, Queen, Elton John, Diana Ross, Journey, the Spice Girls, Madonna, and Michael Jackson. Song Contest was there when the Civil Rights Act was signed, and it was there when the first man landed on the moon. If anyone asks you “Which came first, John F. Kennedy or Song Contest?” You can tell them it was Song Contest, thank you very much.

Mr. Griffin shared his thoughts on another aspect of Song Contest. He said that seeing students come together and work hard to create something unique to their grade and then perform it in front of the school is a special experience. He also mentioned that even for the students that don’t like their part, it’s still enjoyable to watch your fellow students and the teachers perform. I think he was right about this point; if you didn’t find happiness in watching Mr. Greene with his cowbell last year, well, the only excuse for that is not being there to see it.

Song Contest can also occasionally surprise us with people’s hidden talents. Mr. Griffin said that oftentimes, when watching Song Contest, he sees a student do something with the performance that he never knew they could do before. He gave an example of when he was impressed by Carlo DeFelice two years ago when he took the mic and sang for his grade. I agree with this point; remember last year when Arda did the splits? It was pretty incredible.

So now I’ve figured it out. Song Contest has lasted through the ages for a reason. It causes students and teachers to come together, it brings out the performer in us, and it means we can see our peers shine in ways we never could’ve imagined. The only problem with all of this is the reluctance that people have to participate. However, I believe this can be attributed simply to the fact that while some people enjoy performing, some just don’t. And that’s okay, because you know what? Song Contest has been around for ages, and it’s not going anywhere anytime soon. My advice? Actively participate as much as you can, watch your peers and cheer them on, and maybe by the time you’re a senior… Who knows? You might even learn to love it.