Cross Country Closes with a Championship 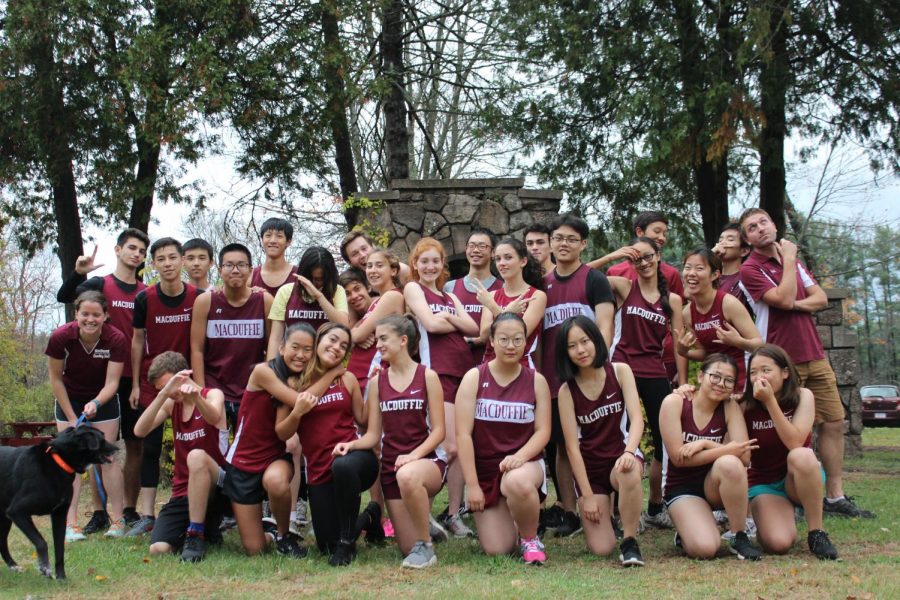 The Cross Country Team feeling goofy before a home meet.

For the second year in a row, MacDuffie Cross Country has outrun their competitors and brought home another championship banner.

The Girls’ team placed both second in the CISAC (Connecticut Independent School Athletic Conference) championships on October 28th and took home a first place victory in the SENE (Southeastern New England) championships on November 3rd. The Boys team concluded the year in fourth at CISAC and took third place at SENE.

This year the Girls’ team was stronger than they were in years past. As expressed by Cross Country Coach Anna Cressotti, one of the biggest changes was simply the number of girls on the team: “we had more girls so we could feel a full team every race.”

Although the consistency of the girls’ running helped get them far, increased attendance to practice and physically more meets made a huge difference in the outcome. Cressotti said, “We were able to get a lot of races in in September which really prepares you for the championships.”

The girls stepped up and worked together to make history, taking home the girls SENE championship despite the absence of one of the team’s key runners, Junior Nicolette Peterson.

Junior Olivia Ramirez, who received second place overall and was the first place finisher for the MacDuffie girls, remarked that after finishing the race, she had a feeling the title would be theirs. All of the MacDuffie girls finished within the top fifteen, including Freshman Maria Hua in fourth and Junior Haley Moriarty in sixth place. Ramirez said in looking forward to her senior year, “I’m proud, the girls team was pretty solid this year and next year is only going to be better.”

The Boys’ Cross Country team lead into the season with the loss of three seniors, Evan Murdock, Josh St. Pierre, and Donovan Richardson, who were important runners in helping them bring home a win at CISAC championships last year. This year the team was dependent on its new members to help pull through.

Although there were no championship wins, according to Cressotti there were several great personal accomplishments for the boys. Sophomore Ian Hua, Senior Ethan Deecher, and Sophomore Mehmet Tuncer were consistent runners, placing within the top fifteen in most races. Hua placed first in the SENE Championships for boys.

Throughout the season the runners that would consistently place sixth, seventh, and eighth out of the MacDuffie boys, Senior Vincent Pedersen, Senior Dollar Zhu, and Junior John Bellingall, found a way to help their team by working as a pack. Cressotti, pleased with their teamwork, said, “yes, [Cross Country] is an individual sport in that you’re the one controlling your effort and it’s you against your own time, but it’s also a team sport.”

Five seniors graduate this year, including Ethan Deecher, Vincent Pederson, Dollar Zhu, Celine Wang, and Hans Li. Deecher will be one of the team’s biggest losses as a three year member and a very vocal leader. “We’re gonna need some of the boys next year to step up and fill Ethan’s place,” Cressotti said.

Pedersen explained that while he might not always miss the running, he enjoyed the season with the team. Ramirez agreed, saying the team becomes close over the season.

“We all bond over the pain of running and we laugh at all the funny moments together,”she said.

Cressotti concluded that it’s a great team and that, “despite how much some of them complain about running,” the season was full of fun memories.