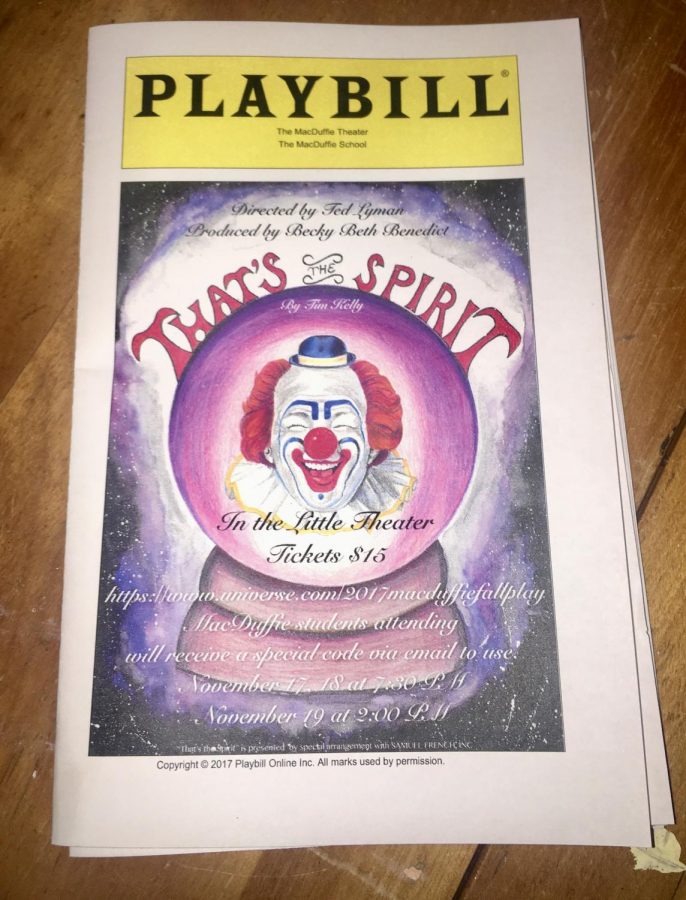 That's the Spirit! Playbill, an exciting first for the Theater Department.

After attending this year’s fall play That’s the Spirit, I’d be lying if I said it wasn’t obvious who the killer was. Don’t let that fool you, though, for it still was comedic, had plot twists and misdirection, and most of all was quite entertaining.

That’s the Spirit hit the Little Theater October 17th and 18th, Friday and Saturday, at 7:30 p.m., followed by a 2:30 p.m. matinee performance Sunday the 19th. The play was about the murder of a psychic named Jenny Davenport (Sofiia Akhmechet) who lived in the house of the illustrious illusionist The Great Marvel. This murder takes a comedic twist as not only the police become involved but another eccentric psychic by the name of Claire Voyant (Anastasiia Buiadzhy) and her crew of mystics tag along to solve this mystery. Add to this a crazy hermit, a cocky actor, a desperate niece, and a coyote patroller and you’ve got a murder mystery with a whole lot of possible suspects with just as many laughs.

The cast’s ability to bounce jokes off one another and continue to maintain character was excellent. Something that might have not caught the eye of many audience members is how characters who were not the main focus of the scene were still able to contribute with their facial expressions or ad libs. Vincent Pedersen, as Scotty Nelson, was especially good at this while he had a lampshade over his head as he eavesdropped on a conversation, which made for one of the more comedic moments of the play.

However, one flaw of the play was how obvious the killer was. After watching the two opening scenes, identifying who it was became an afterthought due to the similarities in body build between the killer clown and one of the other characters. This was due to the Little Theater being so small in size that if you had a seat in the first three rows, it becomes very easy to point characters out because of their distinctive features. Furthermore, the play got too carried away with how many characters had a limp just to misdirect the audience because the clown had a limp. This essentially led to the only character without a limp having to be the culprit. thus making it obvious who the killer was from the start.

Although the play’s core villain might’ve been given away too early, the laughs and quirkiness to it still make the play worthwhile to watch. The actors were brilliant in their roles and all those involved in the production in general did a great job.