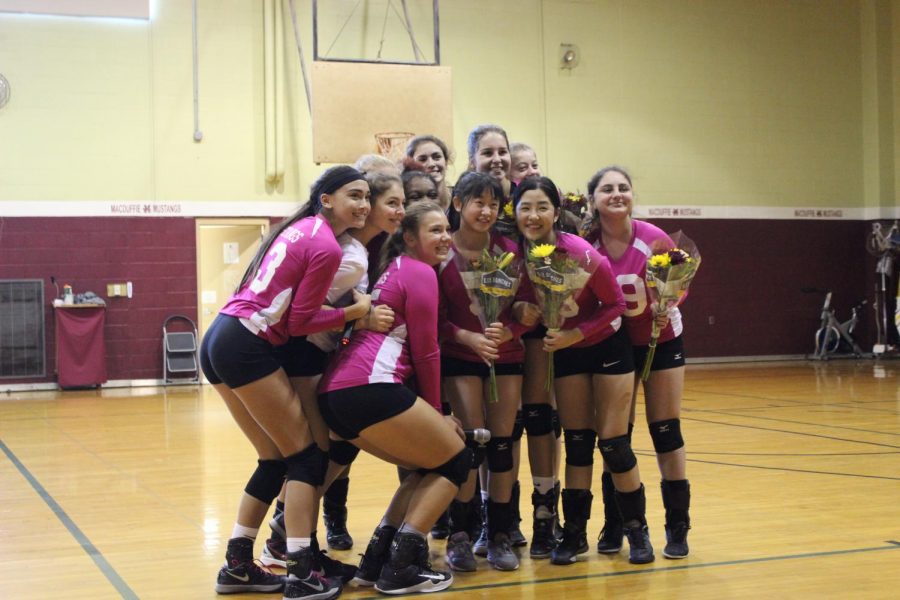 “My kids, when they were little, would ask, ‘Mom, are superheroes real?’” Spanish Teacher Laura Vachet reminisced. While she would hesitate in her response, she remembers how her “youngest would say, yes, Denise! She is a real superhero because she beat cancer.”

Vachet’s friend Denise was unexpectedly diagnosed with stage four breast cancer in 2011. This year Vachet ran a ten kilometer race that raised awareness and funds to help cancer patients and their families. The MacDuffie community strongly aided Vachet in donations, displaying their personal awareness to the cause.

This year MacDuffie athletics has supported Breast Cancer Awareness Month by producing and wearing pink long-sleeve shirts with bold black lettering that states, ‘MacDuffie, Unite, Fight,’ below a pink breast cancer ribbon. The shirts have been offered to all of the fall athletic teams and the profits will be directly sent to Cancer Connection, an organization in Northampton, MA known for its help in breast cancer research.

Athletic Director Merion George, who codesigned the shirts, says he found the organization through Vachet, who said, “Cancer Connection, in Northampton, offers a lot of support before, during, and after the diagnosis.”

In recent years the athletics department has tried to up their game in support and awareness. Three years ago, George says he was approached by a parent personally affected by breast cancer who had bought pink shirts for the soccer team. As a result, the athletics department bought pink jerseys for the rest of the fall athletics teams. Teams have shown their support by wearing these pink jerseys ever since.

Prior to this relatively recent show of support, George recalls that MacDuffie has been supporting Breast Cancer Awareness for several years. Even when the campus was still located in Springfield, MacDuffie supported breast cancer research in October by holding their own Rays of Hope walk where students and faculty “walked around the sports fields for hours just raising money.”

Additionally, this year MacDuffie’s DuffCare (a new club focused on community service) has sold light-up jars of candy, baked goods, and Rays of Hope pins to give funds to the cause. In an all-school announcement during assembly, Sophomore Julianna Segura, who is a member of DuffCare, said that they raised over three hundred dollars in donations. All proceeds will be donated to Rays of Hope, a local charity that focuses on breast cancer research.

Segura writes in an email, “My great grandmother died of breast cancer so that really makes me motivated to help fund research that could produce medical breakthroughs.”

Vachet, similarly affected by breast cancer, expresses how important it is to do all we can as a community to support victims and their families. On October seventh, Vachet participated in a ten-kilometer race in Lewiston, ME called the Dempsey Challenge.

The race is put on by Patrick Dempsey, an actor most famously known for his role on Grey’s Anatomy. He began the race to help raise funds for the Dempsey organization, which as Vachet describes assists in helping “the town to provide free cancer support for anyone from anywhere who needs it.”

In remarks to donations contributed by MacDuffie, family, and friends, Vachet said that “the support was overwhelming; they doubled what my minimal goal was to participate.” Vachet explained that she ran for her friend Denise and said how, “The beauty of all of this is, [Denise] had many surgeries, she had reconstruction, she had nerve damage, and physical therapy,” but in the end she overcame these seemingly insurmountable obstacles and beat cancer. She was deemed cancer-free in 2016.

Vachet explained that while running the hilly ten-kilometer course one means of her motivation was to put herself into a different perspective: “If they can suffer through cancer and chemos, then what is a race to me?”

George sums up the importance of expressing support during October: “There are lots more students that I don’t know about that have connections to breast cancer, family members that are impacted by this, and I think that it’s only right that we do what we can.”