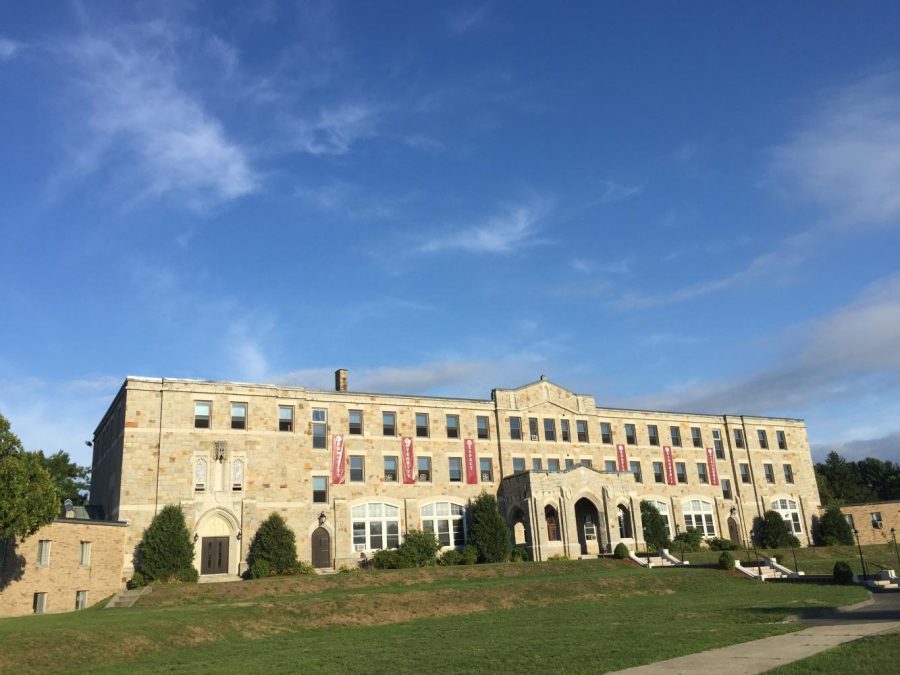 MacDuffie's main building on a sunny day in September. Photo by Caffrey Chen '18.

October 5, 2017 marks the beginning of the end for seniors and potentially retiring faculty members. This is the date of Mountain Day, a school wide event where MacDuffie students celebrate their diversity and community, as they spend the day hiking Mt. Holyoke with one another in Hadley, Massachusetts. To conclude the day, students come together with the traditional candlelight ceremony and participate in the cohesion of the inner and outer circles.

Mountain Day is an experience that has held great importance in the community for many years. According to Dean of Boarding Dina Lyman, “Mountain Day is an opportunity to climb a mountain with a bunch of people, some of whom you may know, some of whom you may meet along the trail…you end up just chatting with people that you might not otherwise interact with and making a friend. Maybe it’s not necessarily a friend in your grade or someone that you’re going to spend hours and hours with in the future, but it is somebody in your school community that you now have a little more connection with than just passing them in the halls.”

Senior Jocelyn St. Onge agrees with Ms. Lyman, stating, “I get to spend time with my friends and meet new people.” She adds, “Mountain Day is bringing the community together as one, it’s a good way for everyone to become friends and not just stick to your normal friend group, a teen bonding sort of thing.”

Lyman, a part of the MacDuffie graduating class of ‘66,  informed us that when she attended MacDuffie as a student the tradition did not exist as an event experienced by the entire community. She says, “I say we didn’t do it because I never did it . . . in those days it was never an all school event.”

Despite this, Lyman recalls that when her mother’s class was at MacDuffie, they had an event that was similar to the experience. She explains how “…they used to have a day where they took the trolley and they went to Mountain Park.  It was the same kind of assertive day off from school, but it wasn’t the Mountain Day that we know.”

The Mountain Day that most returning students and faculty are now familiar with first began some time between Lyman’s graduation as a high school senior and return as a faculty member.  She says, “When I came back to work at MacDuffie in the Fall of 1979, that was the first Mountain Day that I experienced, and I know they had been doing it for a while before that.”

In those days, Lyman says climbing Mt. Holyoke was a very similar experience to that we have now. Although they did experiment with other mountains, this was the one that best suited the experience. Lyman says, “[We] decided that Mount Holyoke is challenging enough without being too overwhelming…. it has the best of both worlds. What’s nice about it is it doesn’t take the whole day… The Mount Holyoke Range State Park is not very far away, and you’re not hiking for hours, and hours, and hours.”

In response to the difficulty of the mountain, Senior Nate Enders says, “New students should not be freaked out by climbing the mountain if they think it’s too much for them. There’s always going to be someone near you climbing at the same pace, and in that aspect it’s a great way to talk to some people that you haven’t had a chance to meet yet….I think the length and the intensity of the hike is perfect for anyone to be able to do it.”

While the best part of Mountain Day is up for interpretation, Lyman light-heartedly said “Correct me if I’m wrong, but my senses are that people’s favorite time of that day is just hanging out at the top.” Senior Jola Oke confirmed this opinion, stating “The best part about Mountain Day is reaching the top and chilling with your friends, people group up, hang out with each other, talk, and take pictures.”

Following dinner upon returning from the mountain is the Candlelight ceremony. Lyman says this tradition originally occurred exclusively for boarding students, stating how “Doctor Rutenber started (Candlelight) in the forties as a way to help the boarding students get over being homesick.”

Lyman’s first Candlelight was also experienced when she returned as an employee; however, she has a rough understanding that the event changed in the late 60’s or 70’s to be inclusive for all students, both boarding and day. She explains that Mountain Day typically occurs in early October because it’s around the time when new students have familiarized themselves with the way MacDuffie works. She says, “(Candlelight) is  sort of an affirmation of all that.”

Mountain Day has experienced minimal changes since the late 60’s or 70’s. “We’ve always left either the auditorium or the gym in silence, made the circle, and lit the candles the way we light them, then processed out of the circle, gathered in one spot, and sung the Magnolia Song” she says. However, additions that have occurred include the inner circle, adding of flags representing students’ countries, and shortening the once four-verse song of “Summer Suns.”

Lyman expressed that in the time before the ceremony, “…sometimes I get choked up because it’s really the [seniors’] first goodbye. It’s really the first thing that they will do for the last time.”

Mountain Day holds an especially memorable significance to seniors such as Amy Hwang, who said, “When I leave MacDuffie I will definitely miss Mountain Day and the Candlelight ceremony. It’s a MacDuffie “thing,” that’s unique to MacDuffie . . . not many schools have this.”

St. Onge explains the importance of Mountain Day as a senior to her, stating “I will definitely miss Mountain Day because I will miss spending time with my friends, especially the ones I’m leaving behind as a senior.”

Overall, faculty members and students advise that Mountain Day is an event to take in and appreciate. As a word of advice, Senior Jola Oke said, “Look forward to it and don’t overthink it that much.”

While the day is complete after Candlelight for grades 6-11, seniors then begin a long night of fun at MacDuffie. In Senior Sleepover, all seniors spend the night on campus with games, dances, and pranks, only to surprise grades 6-11 upon their return Friday the 6th.