In Brilliantly Executed Musical Theater, Anything (perhaps a little too much) Goes. 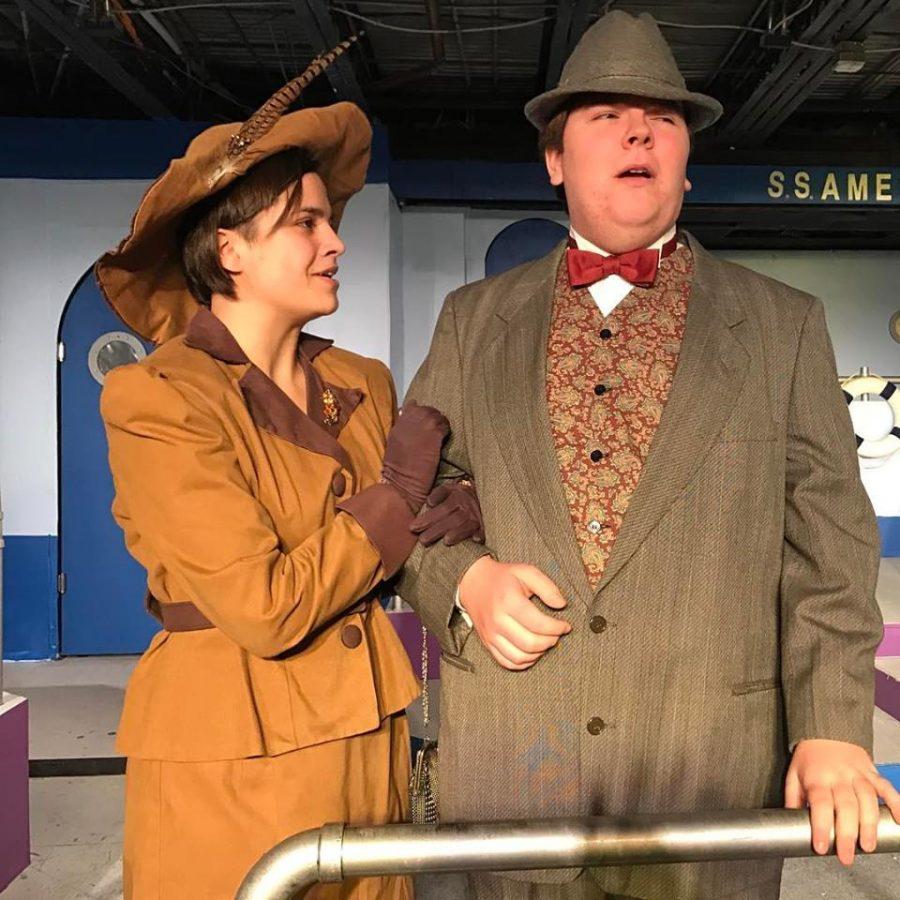 This weekend, the S.S. American set sail for England, carrying the Little Theater audience and thirty brave actors on a voyage of music, mayhem, and mistaken identity, as MacDuffie Theater presented for its Winter Musical a diverse reimagining of the Broadway classic Anything Goes.

The cast was led by an electrifying performance by senior Guo (Daisy) Cheng, one of Chicago’s cell block girls in 2016, as celebrity ex-evangelist nightclub singer Reno Sweeney. Cheng, exuding confidence and a justified certainty in Sweeney’s brilliance, carried massive ensemble numbers, charged duets, and a stirring solo with equal command.  Making a similar ascension from ensemble to stardom was senior Hangyi (Steven) Liu, who delivered an equally earnest and devious performance as Billy Crocker, a wall street broker who is unabashedly in love with ex-flame Hope Harcourt (senior Maria Buxton, deftly executing difficult duets and demonstrating a refreshingly straightforward moral compass), but perfectly willing into get swept up into criminal machinations that pass him off as Public Enemy Number One “Snake Eyes” Johnson. The strength of his voice was evident from the opening number, and provided a brilliant combination with Cheng’s in “You’re the Top” and “Friendship.”

Stealing the show, however, was junior Long Chau as Moonface Martin, an aspiring gangster who does all he can to enable the conspiracy and fumes at being modestly rated as “Public Enemy No. 13.” Providing the best of the show’s comedy with snappy dialogue and dynamic reactions, Chau drew the largest reaction of the night as his comic relief culminated with “Be Like A Bluebird”, a ruthless musical treatise on optimism delivered to Billy after the two are exposed and thrown in jail. Meanwhile, senior Courtney Hurley matched Chau’s criminal energy as Moonface co-conspirator/girlfriend Bonny, showcasing an impressively thick accent and her trademark powerhouse vocals on the high-octane “Heaven Hop.”

Also starring as the chaos aboard the ship were sophomore Craig Judicki as oblivious, heavily-accented British gentlemen Evelyn Oakleigh, engaged to be married to Hope but stumbling into love with Reno, and seventh year senior Cassidy Polga as Hope’s insistent mother, Mrs. Wadsworth T. Harcourt, who is determined to make sure her prospective son-in-law follows through on his engagement (and that the passengers can speak proper French). Judicki’s mastery of over-the-top, absurdist comic relief characters and Polga’s experience in bringing scene-stealing supporting characters to life completed a delightfully eccentric knot of matrimonial intrigue.

Rounding out the principal roles was junior Tae Seol (Kevin) Hong, perfectly extreme as Wall Street banker and Billy’s temperamental but changeable boss Elijah J. Whitney, who immediately falls victim to an eyeglass heist and quickly loses any pretensions of dignity as he spends the voyage unable to see and thoroughly intoxicated by the voyage’s temptations.

The excellence didn’t stop at the top, extending to the highly skilled ensemble making up Reno’s “Angels,” an evangelized nightclub troupe named for Christian values, who helped Hurley and Cheng turn “Heaven Hop” and “Take Me Back To Manhattan” into showstoppers, and the contingent of sailors and passengers who gave the S.S. American its atmosphere of constant motion and uninterrupted action.

As usual, the vibrant performances of both veterans and newcomers were made possible with an efficient tech operation. Senior Alana Ford, assisted by sophomore Georgie Brown, stage managed a tech crew that seamlessly orchestrated formidable scene changes as the action flipped from the deck to the cabins or the brig and back again.  Magnificent costumes added shine and glamor to the extravaganza, with junior Beyza Yilmaz’s costume crew fitting the actors with clothes befitting a luxury cruise of outlandish characters, with plenty of sparkling dresses and garish hats.  Freshmen light operator Meaghan Jaques and sound operator Dale Messer kept the show running smoothly from the booth, and the sum of activity took place on a typically intricate set, with guardrails, ad-hoc cabin walls, jail bars, and plenty bright blue paint making the notoriously small Little Theatre stage look like a cruise ship capable of hosting thirty-odd never-idle passengers with a handful of musicians for good measure.

As impressive as the performance was from all involved, however, the product was complicated from the book they were working. While Anything Goes is heralded as a classic of the medium for Cole Porter’s memorable songs, the original libretto by Guy Bolton, P.G. Wodehouse, Howard Lindsay, and Russel Crouse debuted in 1934. While MacDuffie Theater performed a production of the restructured 1962 revival, the show retained troubling instances of anti-Chinese racism. While the casting of Cheng, Liu, and Chau in the three largest roles subverted the racist context of the original somewhat, the unaltered dialogue still exploited the same dynamics, with their delivery by Chinese actors only serving to allow the audience to laugh at the irony while ignoring accountability for the fact that the sentiments are not any less offensive. The appearance of two racist caricatures of Chinese gamblers, pejoratively named “Ching” and “Ling,” by Chinese actors Yicheng (Alex) Hao and Hanbei (Eric) Xiong is simply bizarre, despite their sublime performances and interplay with Chau – the monstrosity of white characters portraying such characters is avoided, but the racism of the writing is not.

These concerns were shared by Head of School Steve Griffin, who played a passenger in the ensemble. “As an actor, it was surprising to hear the use of stereotypes (accent, especially) for laughs,” he said in an email while the production was in its first month of rehearsals. “When this play was written, it capitalized on the mystery of ‘other’, and the ability to make fun of ‘other’ without a real chance of a negative backlash.  In this era of a smaller, flatter world, there really isn’t an ‘other’, especially with our Chinese student population.” He said that that while acknowledging the historical context of the show’s racism is vital for both the actors and the audience, “It doesn’t let us off the hook. If we’re still playing stereotypes for cheap laughs, we won’t have done our jobs.”

The direction of the play complicated the racist tropes, certainly, but ultimately failed to deconstruct them, as the audience felt liberated to laugh at racist jokes by the irony of their delivery.   And even with the production’s best efforts to counteract the script’s failures, Judicki is still left explaining Evelyn’s affair with “Plum Blossom” in the repulsive language of racial fetishization. Perhaps cutting all of these elements would not be possible while maintaining the structure of the show (or McDuffie’s rights to perform it). But if such blatant racism against one of the largest ethnic groups represented in MacDuffie’s population is endemic to a show considered a classic of the musical theater canon, perhaps MacDuffie Theater should reevaluate its relationship with that canon, especially when it leads us to produce plays that run counter to our core values.

With that said, Cheng, Liu, Chau, and the rest of the cast and crew did their best with what they were given. And their best was something truly special, yet another reminder that when MacDuffie Theater puts their collective talents to the task, anything goes.