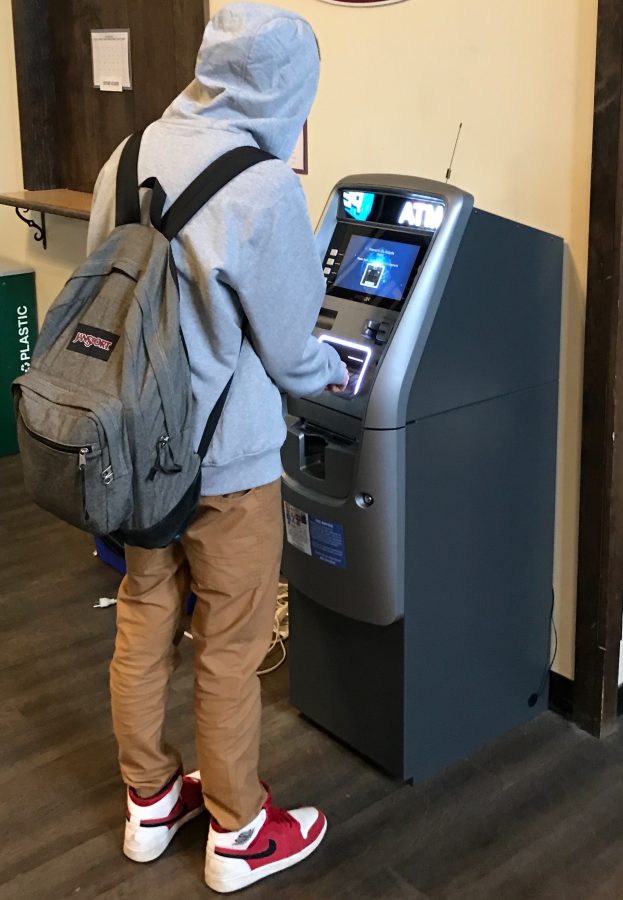 No cash? No problem. A student makes use of the ATM in the student center.

There has been a sudden appearance in the student center  of a new method of banking for students: an ATM. In mid-September, the MacDuffie School pursued and entered into a contract with a company based out of Boston that issues ATMs to small businesses.

The school has arranged a 90-day trial period with the company to see how the ATM is doing in terms of student use, complaints, and generated profit for the vendor. Business Manager Andrew Parker says, “It was actually a struggle finding a vendor that would agree to place an ATM without a guarantee to get a profit, which is why this is still on a trial base.” With roughly two and a half months to evaluate its effectiveness, the question remains whether MacDuffie will make the ATM a permanent feature on campus.

Parker says the ATM is “something that we have looked at for a while now; there has been a pretty consistent demand for an ATM for our boarding student population. And [Head of School Steve] Griffin asked me what it would take to get an ATM here on campus, just to serve our boarding and day population.”

So far, the ATM appears to be convenient to campus life. Sophomore boarder Cindy Nguyen said, “I like that they have something like this, because before they had the ATM I know people, and even myself a lot of times, have to go to the mall for 3 hours to just withdraw money.”

Although the benefits of the ATM are evident, the manner of its operation has drawn complaints. Nguyen says this particular ATM  charges a higher fee to withdraw than other ATMs in the area. She claims that “People use it a lot, but mostly because they had to.”

Junior boarder Jola Oke agrees and is glad for the addition of the ATM to daily life, ““except for the times it goes out of service, that needs to be fixed. It gets fixed, but it shouldn’t happen as often.” Oke jokingly says that despite these flaws, “I would be devastated if the school took it out.”

Overall, the ATM has seemed to have a generally positive appeal to school life. Once the 90-day trial has finished, the vendor will either make a further contract to have the ATM remain or have it removed.